It was totally unexpected, but entirely welcome.

“I’m thrilled the MacArthur Foundation has recognized me for this honor,” Gregg Gonsalves, Ph.D., assistant professor at the Yale School of Public Health, said Thursday after it was announced that he was a 2018 MacArthur Fellow.

The fellowship—commonly called a “genius grant”—comes with a $625,000 prize paid out over five years. The MacArthur Foundation described Gonsalves’ work as being “at the intersection of human rights and public health research and practice to address inequities in global health.” The highly prestigious fellowship is not given for past accomplishments, but rather for one’s future potential. Gonsalves was one of 25 recipients across the United States this year.

Gonsalves left college as a young man in the 1980s to fight an emerging epidemic—HIV/AIDS—that was devastating the gay community. He returned to Yale in 2011 to earn a bachelor’s degree in biology and then went on to earn his doctorate from the Yale School of Public Health in 2017. He joined the school’s faculty shortly thereafter.

“I am a product of Yale College and the Yale School of Public Health, which gave me the training to bring new skills and expertise to the questions that have vexed me for decades: how do we get HIV treatment and prevention services to those who need them most, how do we give policymakers better evidence to make better choices about policies on HIV and other infectious diseases?” he said.

Soft spoken and thoughtful, Gonsalves credited his colleagues and research collaborators—Forrest Crawford, A. David Paltiel, Ed Kaplan, Paul Cleary and Josh Warren, among many others, for inspiring him on a daily basis. 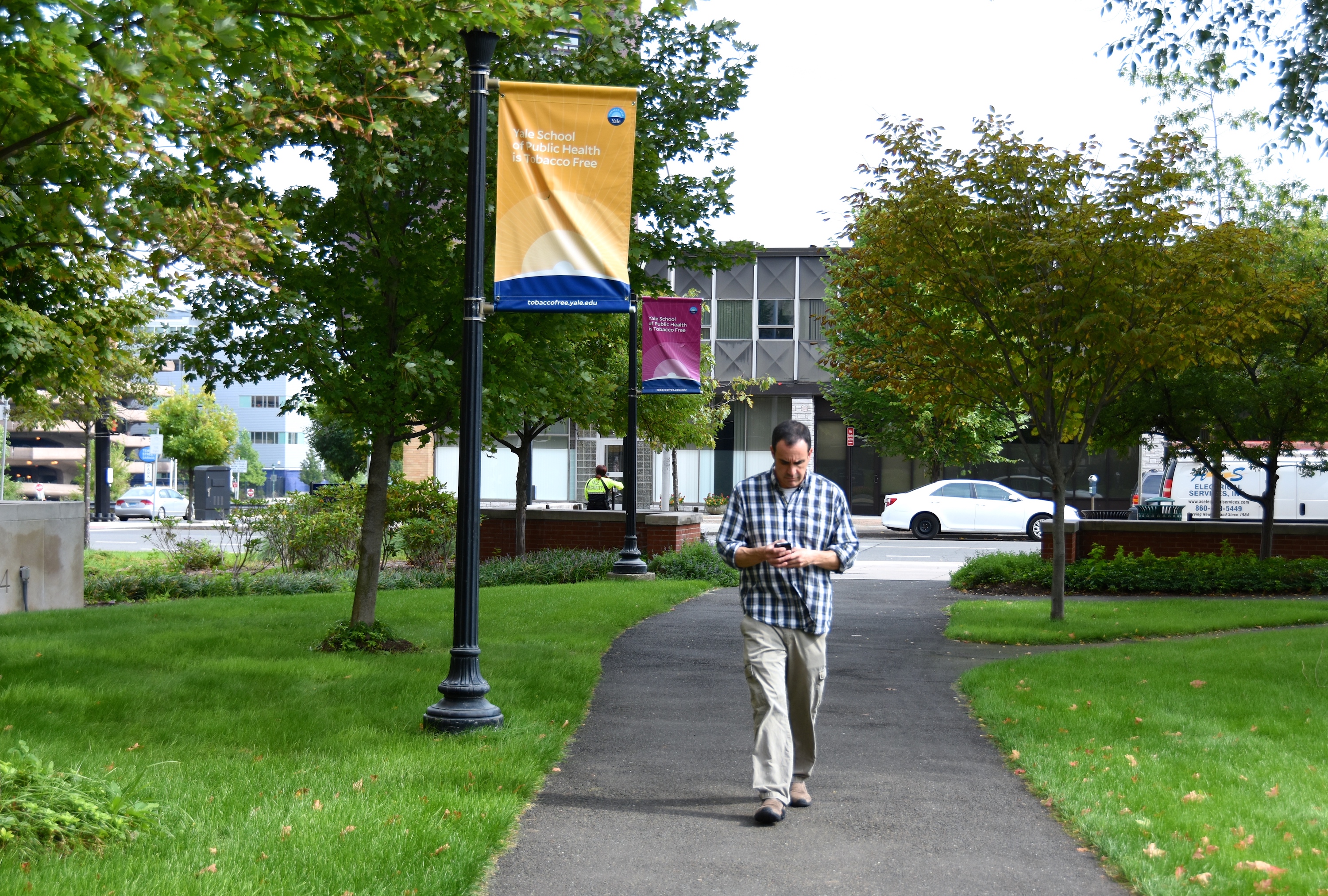 “The Yale School of Public Health is a wonderful place to work to try to answer these questions—there is no place else I can imagine being right now,” Gonsalves said.

Dean Sten Vermund compared the MacArthur to the Nobel Prize—it is for those who are extremely creative and truly make an impact in their disciple.

“Dr. Gonsalves and his activist and academic colleagues have literally changed policies around the world, accelerating drug development and access to care for persons living with HIV/AIDS,” Vermund said. “We are immensely proud to have his leadership in the Yale School of Public Health and our Global Health Justice Initiative with the Yale School of Law.”

Professor Albert Ko, chair of the Department of Epidemiology of Microbial Disease, to which Gonsalves belongs, said his contributions to public health began decades ago as an activist with ACT UP and the Treatment Action Group and have continued ever since.

“Gregg is dedicated to using his talents as a researcher in the fight for social justice in health,” Ko said.

Paltiel, with whom Gonsalves has collaborated on many research projects, said his colleague has a special combination of real-world experience coupled with academic rigor.

“When you combine intellectual brilliance with the humble wisdom acquired from years of working in the trenches, you get Gregg Gonsalves, a powerful force for good in the world,” Paltiel said. 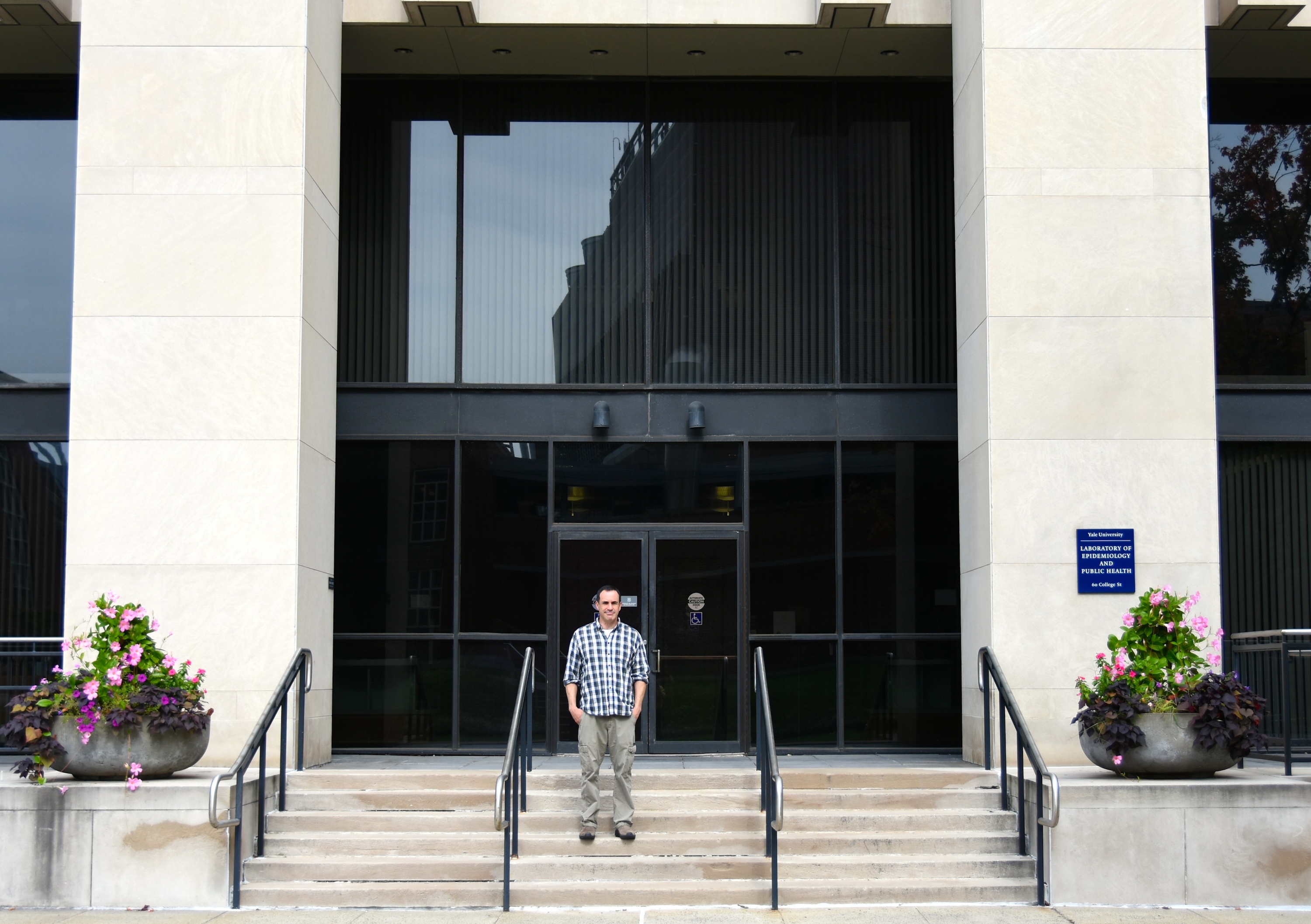 In addition to his work at the School of Public Health, in 2012 Gonsalves co-founded the Global Health Justice Partnership at Yale—a collaboration between YSPH and the Yale Law School. “We’ve been able to connect the dots between health outcomes and law and policies, understand the links between public health and social justice, interactions which are so important in determining our fates, our health and our survival,” he said.

Just last month, Gonsalves co-authored a paper with Crawford on how a 2011 to 2015 HIV outbreak among people who inject drugs in Indiana could have been avoided if the state’s top officials had acted sooner on public health warnings.

Published in The Lancet HIV, the study offers a stark warning to public officials confronting the opioid crisis across the United States. A Republican lawmaker from Indiana cited the study as a “wake-up call.”

Edward H. Kaplan, Willian N. and Marie A. Beach Professor of Operations Research, professor of public health and professor of engineering, said it has been astonishing to watch Gonsalves transform from an activist to a policy and modeling expert as a student, during his dissertation and now as a faculty colleague.

Gonsalves’ recent work includes a study on how increasing the availability of public toilets in South Africa could result in fewer sexual assaults against women, demonstrating that the recent Olympics in Brazil were not a major source of Zika virus contagion, and figuring out how to geographically deploy HIV testing to increase the detection of previously unknown infected individuals.

“Gregg has shown how data, statistical analysis, and modeling public health operations can be combined to help understand and design public health policies for the betterment of vulnerable populations,” Kaplan said.

“In an era when addressing social issues requires the perspectives and methods of different disciplines, Gregg is the consummate interdisciplinary scholar, integrating the perspectives of operations research, law, economics, decision sciences, health services research and epidemiology,” Cleary said. “Yale is extremely fortunate that after completing his undergraduate work, he decided to come to the Yale School of Public Health for his doctoral work and that he decided to stay on as a faculty member at YSPH. We are a better community, in multiple respects, because of Gregg.”

Watch the YouTube video produced by the MacArthur Foundation

Submitted by Elisabeth Reitman on October 04, 2018